In late July, Indiana Tech was recognized as an NAIA Champions of Character® Five-Star Institution Award winner and earned Gold Level status with a perfect score.

Tech recorded 100 points on the NAIA CoC® scorecard, which measures institutions on their demonstrated commitment to the Champions of Character program. Points are awarded in character training, conduct in competition, academic focus, character recognition and character promotion. Indiana Tech was one of 16 universities to earn a perfect score for the 2020-21 program. The Warriors were one of 58 schools to earn Gold Level status and have now reached the gold level mark for five consecutive years.

Tech is also just one of eight schools to be named an NAIA Champions of Character Five-Star Institution for all 19 years of the program.

Learn more about the NAIA’s Champions of Character program here.

Warrior Athletics had another banner year across the board as Indiana Tech won the 2020-21 Wolverine-Hoosier Athletic Conference (WHAC) Fred Smith Commissioner’s Cup for the fourth time in program history. Tech has won four of the last five Commissioner’s Cups (2019-20 was not awarded due to COVID-19) and collected 255 points over the past academic year. During the 2020-21 academic year, the Warriors won 19 conference titles: 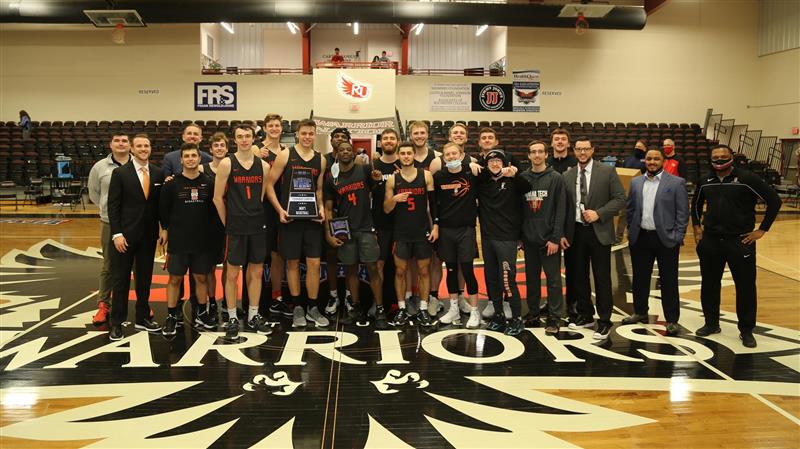 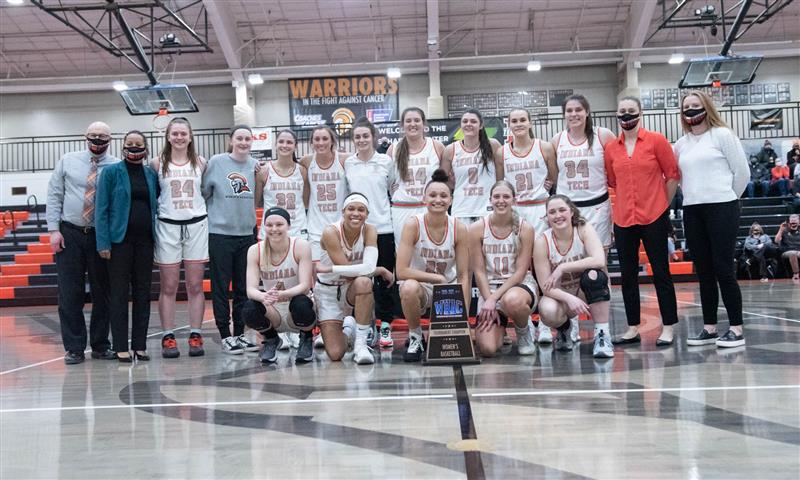 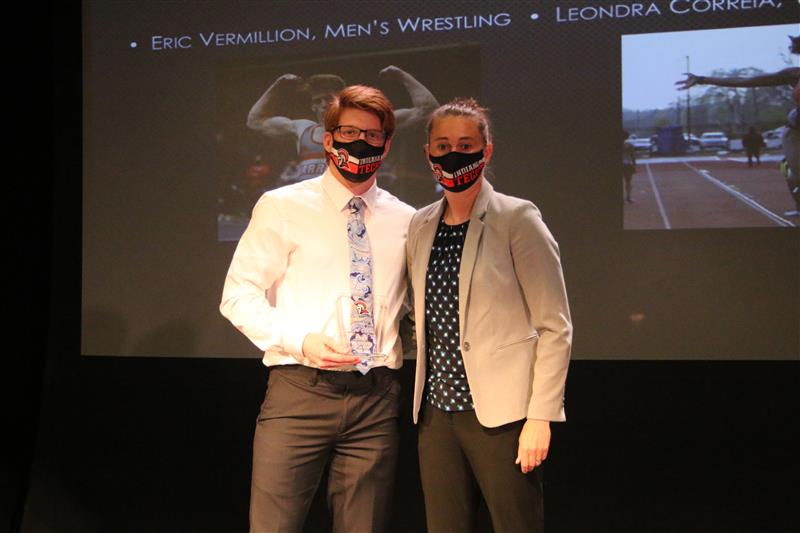 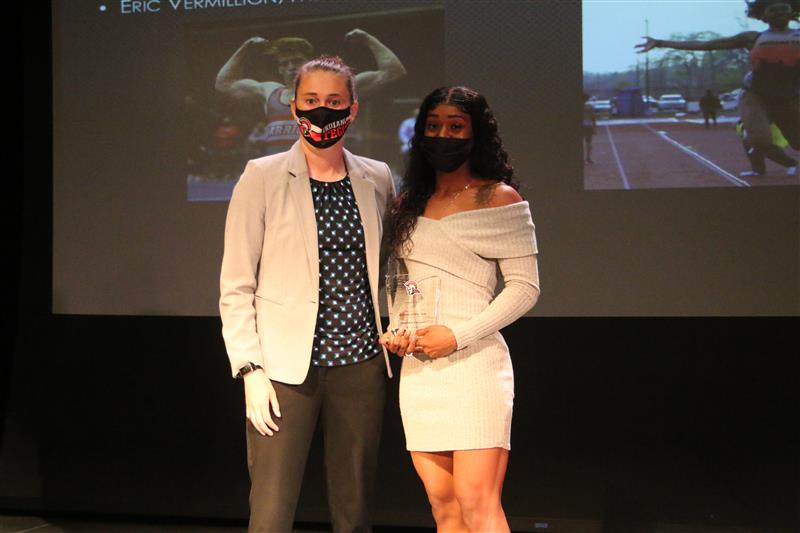 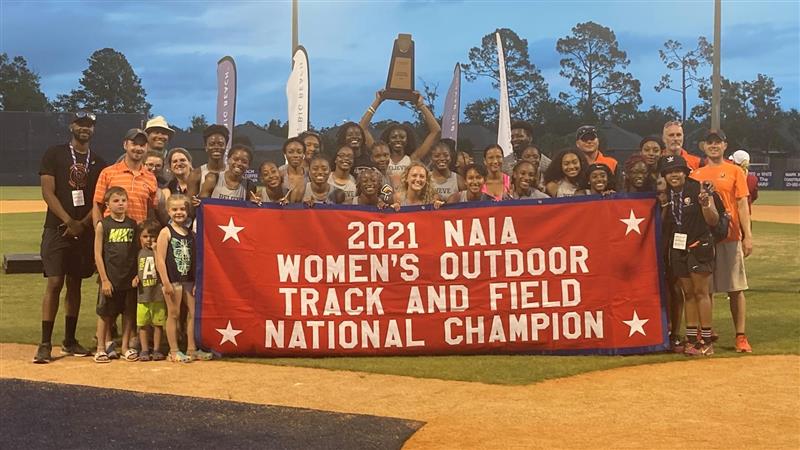 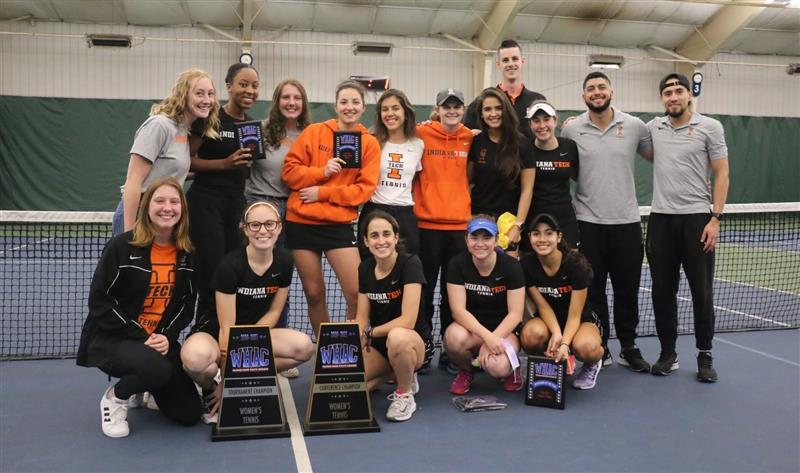 The Indiana Tech women’s tennis team completed the most successful season in program history with a 17-3 record, sweeping the WHAC regular season and tournament titles and qualifying for the NAIA National Championships, all first-time accomplishments for the team while the 17 wins is the most ever for the program. Tech fell in its first-round match of the national tournament to University of the Cumberlands, 4-2. 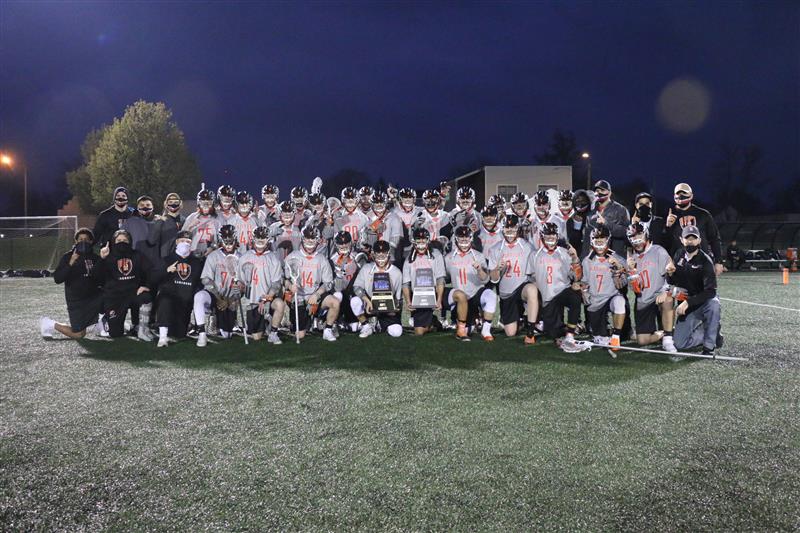 The Indiana Tech men’s lacrosse team suffered just two losses during the 2021 season, both coming at the hands at No. 1-ranked Reinhardt, and the second coming in the NAIA National Invitational Championship game. Tech finished the season 18-2 and made its way to the national title game for the first time ever while sweeping the WHAC regular season and tournament titles for the second time in program history. 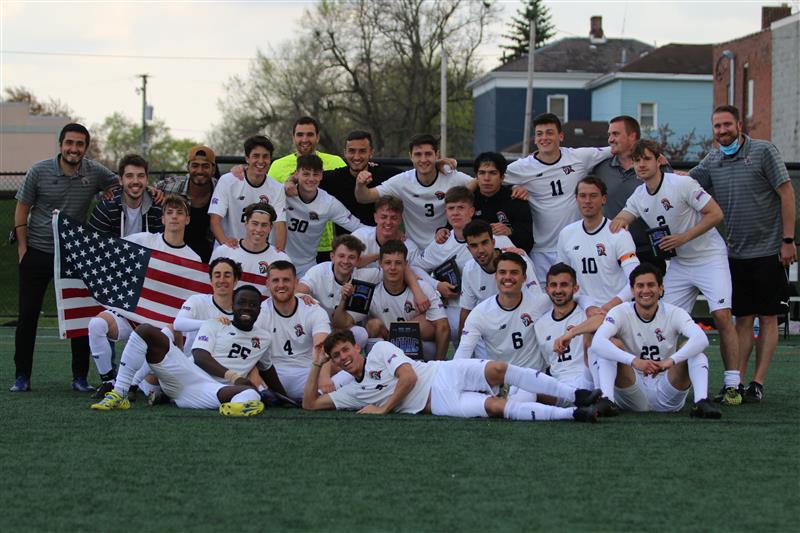 The Indiana Tech men’s soccer program continued its rise as an NAIA powerhouse by finishing the 2020-21 campaign with an 18-2-1 record and repeating as the WHAC regular season and tournament champions. The 18 wins is tied with the 1981 and 1983 squads for the most in program history. The team hosted an Opening Round site of the NAIA National Championship for the second straight season, falling to University of the Cumberlands in the championship match. 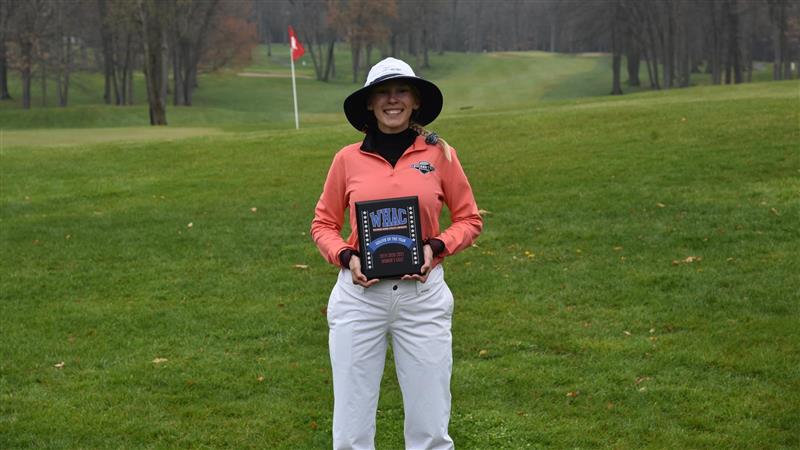 Indiana Tech junior Kim Siercks became the fourth individual in program history to win the WHAC Championship with a 54-hole score of 232 (80-89-73) and earned a bid to the NAIA National Championships. Siercks missed the cut for the national tournament, finishing with a two-day score of 157 (77-80). 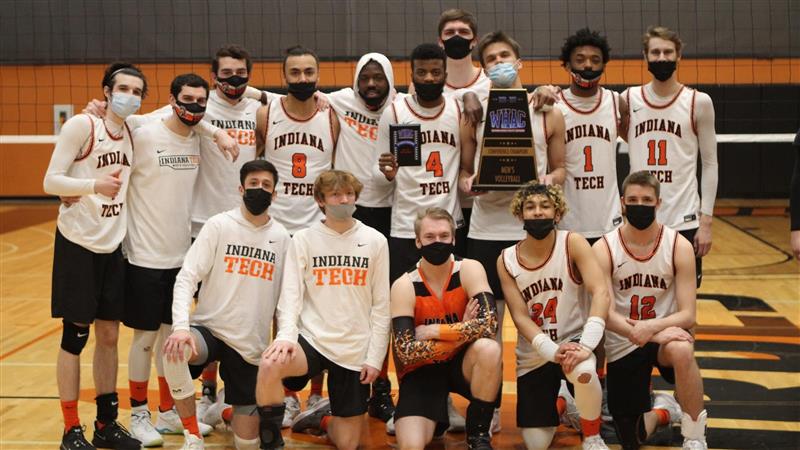 The Indiana Tech men’s volleyball team kicked off its second season with a 3-1 win over No. 2-ranked Campbellsville University, its first win over a ranked team since being resurrected in 2020, and that season opening win set the tone in 2021. Tech finished the season 17-6 and won a share of the WHAC regular season title while receiving a berth to the NAIA National Championships for the first time since 1971. 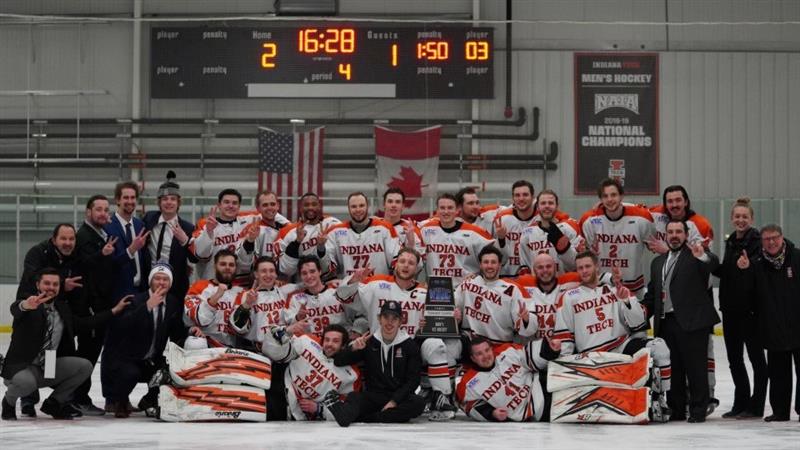 The Indiana Tech men’s ice hockey team had another banner season by going 17-7, sweeping the WHAC regular season and tournament titles, and advancing to the national semifinals of the ACHA National Championship, falling to top-seeded and eventual national champion Adrian College. 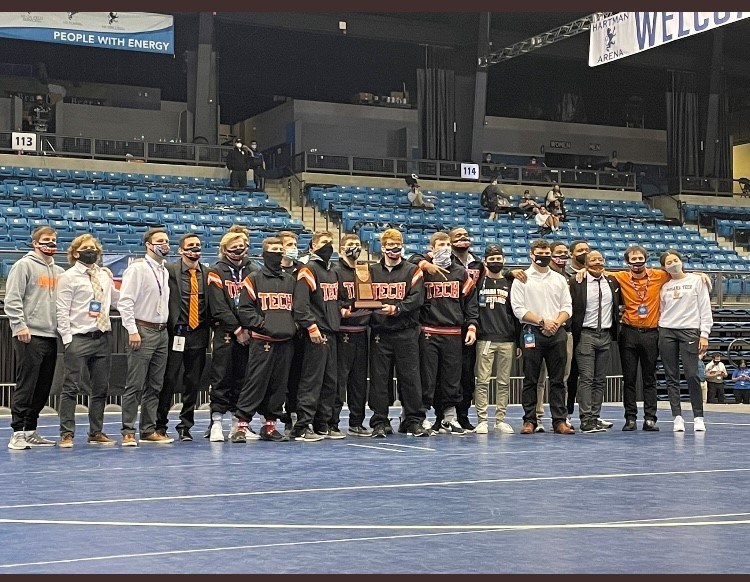 The Indiana Tech men’s wrestling program continued to showcase itself as one of the powerhouse programs in the NAIA. After spending the last three years as members of the Sooner Athletic Conference, the men’s wrestling team found a more location-friendly conference home as the Wolverine-Hoosier Athletic Conference (WHAC)—the home for the vast majority of Tech’s sports—got the six required schools to sponsor men’s wrestling. The Warriors won the inaugural WHAC Championship with 163.5 points and had six grapplers win individual conference crowns. Tech went on to finish fourth at the NAIA National Championships while Conner Gimson and Eric Vermillion won individual titles at 133 and 184-lbs., respectively, becoming the fourth and fifth wrestlers to win a national title. 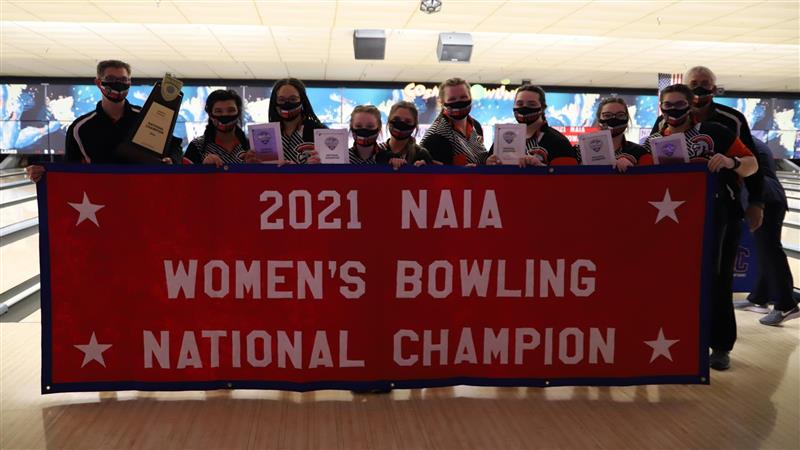 The Indiana Tech women’s bowling team became the seventh team ever to win a national title as they claimed the red banner at the inaugural NAIA National Championships back in March. Tech started off the tournament strong and took home the top seed in qualifying play before going 3-0 in match play to win the title, defeating Midland 2-1-1. Maryssa Carey was named to the All-Tournament Team and garnered All-America Team honors while the senior advanced to the semifinals of the USBC Intercollegiate Singles Championships, the first bowler in program history to make it that far.

The Indiana Tech men’s indoor track and field team won its sixth NAIA National Championship back in March thanks to a win by the 4×400 meter relay of Michael Warner, Mile Gray, Daunte O’Banion and Jordan Highsmith, and a third-place finish in the triple jump by Neville Smith, to give the Warriors 51.5 points, outpacing Dordt University by 4.5 points for the red banner. Doug Edgar garnered NAIA National Coach of the Year honors while 17 student-athletes garnered All-America Team accolades.

Indiana Tech’s women’s indoor track and field team won its second NAIA National Championship with 111 points in early March and led wire-to-wire thanks to a national title in the 3000 meter racewalk by Loanie Cellard in the opening championship event. Leondra Correia had a meet to remember as she scored 38 points, winning the pentathlon, high jump and 60m hurdles to garner Most Valuable and Outstanding Performer awards. Doug Edgar was named the NAIA National Coach of the Year while 24 women garnered All-America Team honors. 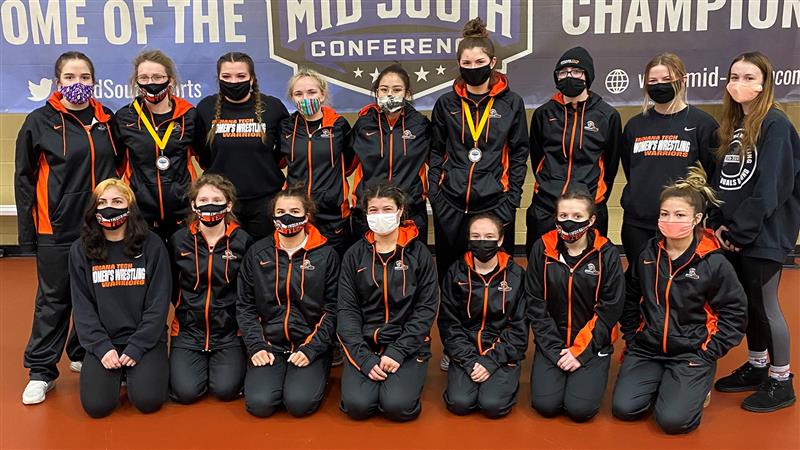 The Indiana Tech women’s wrestling team didn’t pick the ideal year to have their inaugural season, but head coach Paul Rademacher and the Warriors navigated through the COVID-19 landscape and laid the foundation for future success while being competitive on the mat. Tech went 2-6 in dual matches, taking down Brewton-Parker College, 30-18, on Jan. 23 for their first win and finished fourth at the Mid-South Conference Championships. The Orange and Black sent 12 wrestlers to the NAIA National Invitational and had two individuals, Tehani Soares and Samantha Snow, earn All-America Team honors, each taking fourth place at 109 and 143-lbs., respectively. Tech was ranked in the NAIA Coaches’ Top 20 Poll for all five polls, rising as high as eighth (Jan. 28, second poll) and finished 14th in the Postseason Poll.

Best of the Rest

Stay up to date with all things involving Warrior Athletics at indianatechwarriors.com, and watch for the chance to get involved with our revamped Warrior Club coming this fall!

Men’s Cross Country
Did not compete as a team at the WHAC Championships, Jake Willison finishes 18th