In the Remember When feature of the spring issue of Indiana Tech Magazine, we asked readers if they remembered when representatives from IBM installed a Model 1620 computer at Indiana Tech in April 1961, making it the first college in Fort Wayne to obtain a computer.

Thank you, Dr. Lewis J. Bornmann (Class of 1965), Robert Ashby (Class of 1963) and Douglas H. Trotter (Class of 1968) for helping us piece together some of our university’s history with recollections from this momentous occasion. 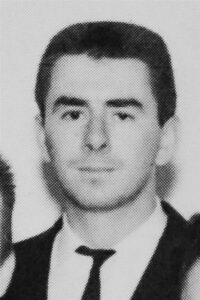 Being very interested in elementary particle physics, my original intent in enrolling at Indiana Tech was to earn my degree in physics, go on to grad school and do research in fusion power generation (a capability that has remained 25 years in the future for the past 75 years). While a topic in which I still remain interested, my experience with the 1620 computer led to my working for Boeing as a programmer/analyst after I earned my degree in 1965. This was a break year prior to enrolling at the University of Wisconsin in what was the initial year of their Master’s/Ph.D. computer science degree program. This definitely was the right decision—there never has been a single moment when I questioned the wisdom of my choice of career field.

I arrived on the Indiana Tech campus in September 1961 immediately prior to the start of classes. Since my home was in New Jersey, I never had been to the Fort Wayne area or visited the campus, so all of it was totally new to me. There also was a slight time constraint on my arrival as I had been on stage during the Miss America Pageant, which did not conclude until a week after Labor Day.

Another student, “Woody” Stillwagon (BSME 1964), offered to show me around campus—an offer I gladly accepted. One of the first stops was the computer room in Hanser Hall (one of the only stops I clearly remember on the tour). Computers were not as dependable back then as they are today: the computer encountered an error and the program running at the time stopped the minute we walked in the door.

Computers were still quite unique and this was the first one I had ever seen—not realizing at the time that this room would become one of my most frequent campus locations for the next four years.

Since computers from that era would be completely unrecognizable by most people today, it probably is best to briefly describe Tech’s IBM Model 1620 computer.

IBM marketed the 1620 as an inexpensive “scientific computer.” It was purchased by numerous colleges and universities to provide an initial computer experience for many students. There were a couple of available system configurations, but Tech’s system was a variable-word-length, stored-program decimal computer with a magnetic-core memory of 20,000 decimal digits. The core memory cycle time was 20 microseconds. The only instruction to complete in a single cycle was a NOP (no operation) with some instructions requiring 20 or more cycles. Yes, it was decimal rather than binary; yes, memory was that limited; and yes, it really was that slow. And yes, few devices available today, including wristwatches or phones, have such limited processing ability.

The 1620 was physically small relative to most other computers of that era, with the operator’s console being the size of a standard office desk with a separate 1622 Card Reader/Punch unit not significantly larger though slightly taller. There was a modified IBM Selectric typewriter for the operator’s console, but all standard input/output was done with 80-column punched cards. All printing was done off-line on a separate printing system.

As it was still several years prior to availability of computer operating systems or even master control programs, only one program could run at a time. Every program to be executed had to be manually loaded prior to every run. First, turn on the computer and load a compiler. Then run the compiler with your source program as input which punched a deck of cards containing your executable program. Next, load the deck of cards with your executable program into the computer and run it using your data as input. The result would be still another card deck with your program output. Then, you typically would turn off the computer even if someone else was scheduled to use the computer immediately after you.

As there was no printer attached to the computer, the final card deck would be fed into a separate printing device with a wireable control board that would print your program results. As I recall, the printer was in a separate room across the hall from the computer.

Since I did not have any financial support, I was always looking for part-time work to earn money. I had a relatively strong electronics background from my Air Force service experience and somehow was hired to wire the printer output boards (no electronics involved). How the board was wired controlled in what column on the paper each character on the punched cards would be printed providing some limited flexibility in the output’s printed format.

From there I moved up to become a computer operator and, in my senior year, programmed mathematical functions for the math department.

I no longer recall who taught the computer classes; this was prior to computer science becoming a separate major, but it might have been Walter Bartlett. The initial textbook was Basic Programming Concepts and The IBM 1620 Computer by Daniel N. Leeson and Donald L. Dimitry, published by Holt, Rinehart and Winston, Inc. I still have my copy.

The computer classes seemed extremely basic to me and I tutored a number of other students who were encountering difficulty.

Computer programs were written in either machine language, a form of assembly language, or in FORTRAN—a common scientific/engineering language. The FORTRAN compiler was still quite primitive and the executable code it produced was so inefficient, I was convinced higher-level compilers, such as FORTRAN, would never be used for “real” applications. The entire computing field has obviously substantially changed over the years.

While I do not qualify as a computing pioneer, I was fortunate to have entered the field sufficiently early to meet and even become friends with many that actually were.

I’m extremely grateful for my initial experiences at Indiana Tech. There probably were relatively few other colleges where I would have fit in as well or could even provide the educational experience that prepared me so exceptionally well for the future. 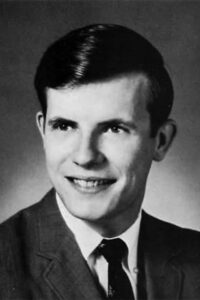 Do I remember the computer center at Indiana Tech? Yes, it was one of the main reasons I went to Tech in 1964. At the time, there was no such thing as computer science. Tech offered engineering, physics and mathematics. Over my tenure at Tech, I tried aerospace and mechanical engineering, but I settled on mathematics. Tech offered all its students several computer courses and created a state-of-the-art (for the time) computer center. I wanted to know everything about the subject. I am a “geek” and will be one forever, so I audited several electrical engineering courses. I worked on both the IBM 1620 and 1130, and studied the manuals and underlying mathematics that made them add, multiply and divide—which was not an easy feat in 1967.

In 1967, I became the computer lab operator—and got paid for it. I was in heaven! I reported to the head of the math department, Professor Carr, and I learned a tremendous amount through his guidance, especially about operating systems.

In 1967, a group of electrical engineering students were considering creating a computer with the clip technology developed by Texas Instruments. The cost of a chip was thousands of dollars. However, our group asked for defects and received chips that did not pass thermal inspection. It was my job to help write the operating system, thanks to Professor Carr. After several months of work, we had an integrated circuit computer that could add, subtract, multiply and divide. That was quite a feat for our crew at Tech. I did not realize how significant it was until my boss at the National Security Agency came into my office—some 15 years later—and presented me with an HP hand-held calculator worth in excess of $1,000.

Upon my graduation in 1968, I joined the United States Navy and was classified as a cryptologist based on my Tech education. Very few students had my experience at the time, being able to write code in FORTRAN and machine language.

I served as a naval officer from 1968 to 1972 as a cryptologist (my first task was to model the sporadic E-layer of the ionosphere). In 1972, I accepted a position with the National Security Agency as a cryptologist and worked with some of smartest mathematicians in the world as well as the largest collections of computers in the world—the IBM 370, the UNIVAC 494, the CDC 7600 and, my favorite, the CRAY Series 105, which the government purchased for $36 million. At that time, the NSA had 26 acres of area under mainframe.

I left the NSA in 1985 as the head of codes and cyphers for the United States to pursue a career in business. I have had a somewhat successful career, and I owe all to Indiana Tech and its computers. 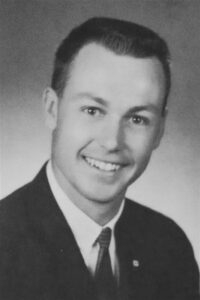 I was studying aeronautical engineering and completing the third quarter of my sophomore year when this computer was delivered. I was enrolled in a traditional four-year bachelor’s degree program where I took each of the summer quarters off. When I returned to begin my junior year in the fall of 1961, I signed up for Differential Equations, Thermodynamics, Strength of Materials and Math 370-Computer Coding.

Computer Coding was a three-credit-hour course taught by Professor Carr. I think this was probably the first quarter that the class was offered. I’m proud to say that I received an A. I interviewed for, was offered and accepted an engineering job with Bell Aerosystems Company of Niagara Falls, New York, near the end of my senior year in 1963. I remember that the interviewers were impressed that I had (the opportunity to take) a course of this type, which was considered rare at the time.