In the previous issue of Indiana Tech Magazine, Assistant Professor of Communication Alicia Wireman revealed exciting new changes she has planned for the university’s communication program. Beginning this fall, students can focus on one of three tracks while pursuing their communication degree — journalism and broadcasting, public relations or sports media.

In addition, they will learn from four award-winning industry professionals who are well-respected in the Fort Wayne area: Justin Cohn, Alyssa Ivanson, Matt Leach and Angelica Pickens (Robinson).

Ivanson, Leach and Pickens were adjuncts with Indiana Tech last school year and received state awards in April for excellence in their field:

Cohn, a senior sports writer for the Journal Gazette, joins Indiana Tech as an adjunct this year. Cohn has won various awards from the Hoosier State Press Association and is Journal Gazette’s long-time reporter for Fort Wayne Komets hockey, which has been the city’s biggest sports beat for several years.

“At Indiana Tech, we pride ourselves on hiring quality instructors who can bring real-world industry experience to our classrooms and make a positive difference in the lives of our students,” professor Wireman said. “Our communication students gain hands-on experience and significant portfolio development, especially when they take classes with people who currently work in the field.”

For 2018 graduate Tywell Williams and the Class of 2020’s Sarah Ratledge, their communication education has already made a positive difference in their lives.

Additionally, he works with youth on music production, song writing, recording and mixing/mastering at Renaissance YMCA in Fort Wayne.

Recently, he worked on the “We Need More Hands” project, which featured a soundtrack for the new Rescue Mission in Fort Wayne. You can see a video of the song here.

“The project was for the groundbreaking ceremony for the new Rescue Mission downtown,” he said. “It was a year-long project, and I’m happy that I was a part of it.”

Tywell said his communication classes at Indiana Tech helped him become successful in the music industry.

“I can establish and foster positive relationships with clients, manage time with musicians and artists, as well as develop my persuasive abilities that are needed for the industry,” he said.

Sarah chose to attend Indiana Tech to continue her competitive softball career and play for the Warriors. What she didn’t know, however, is what she wanted to major in once she arrived on campus.

After indicating an interest in journalism, Sarah was advised to pursue a B.A. in Communication. Since then, she has

learned much about the field, networked with and learned from professionals in the industry, and earned vital, hands-on experience in the form of published work. Her portfolio includes a fun and informative feature story about the Fort Wayne Derby Girls, which appeared in Input Fort Wayne online magazine late in 2018.

“My education has helped assist me in writing.  My classes have given me a good idea of Associated Press format, writing leads and how to write a certain type of story,” Sarah said. “I plan to continue writing because I really enjoy interviewing people. I am a very curious person, so writing and asking questions is really fun for me. I also love the freedom and ability to be creative that comes along with writing.”

Sarah’s story about the Fort Wayne Derby Girls can be found here.

“I’m so happy for Tywell and Sarah,” professor Wireman said. “The communication program aims to help students apply what they have learned in their classes to be successful individuals in the industry, and Tywell and Sarah are perfect examples of that.”

Those are the questions that will be pondered during the 2019-20 Tech Talks series.

A collaboration between Indiana Tech’s Academics and Student Affairs departments, Tech Talks will explore identity, with topics about race, first-generation status, gender, sexuality, athletics and more. More information about the series, along with a schedule of events, is available on our website.

The purpose of the co-curricular Tech Talks series is to promote active dialogue and awareness about important issues of social justice across the globe. Through this series, the university hopes to:

The topics of human trafficking and America’s opioid epidemic were the first two covered by Tech Talks.

Indiana Tech is now recognized as a Small World Initiative partner institute. Associate Professor of Biology Julie Good applied for and earned the designation after participating in training this summer to learn ways to maximize this designation.

The Small World Initiative is an innovative program that encourages students to pursue relevant science in a semester-long lab in order to address a worldwide health threat—superbugs—and the diminishing supply of effective antibiotics. In 2012, the President’s Council of Advisors on Science and Technology reported an enormous economic demand over the next decade: the U.S. needs to produce one million more STEM graduates than the current graduation rate predicts. Yet, the number of students pursuing STEM degrees has been decreasing, with many citing uninspiring introductory courses as a factor in switching career paths. Since its inception, SWI has grown rapidly to include nearly 400 undergraduate institutions and high schools across 45 U.S. states, the District of Columbia, Puerto Rico and 15 countries. In addition to expanding SWI on a global scale, it is also developing the infrastructure to allow SWI’s grassroots antibiotic discoveries to move forward into R&D programs.

Indiana Tech joins one other university in Indiana (Rose-Hullman) with this designation, which will add to the university’s appeal for students and future funding opportunities. It will resonate with students interested in our new biology major and our forensic science and exercise science programs.

“Being a part of this international effort reinforces my active-learning approach to teaching and connect me with other cell and molecular biologists who are teaching the discipline of microbiology (my specialty) in a coordinated effort,” Dr. Good said. “Furthermore, membership in this unique group brings my research background into the forefront again, renewing my knowledge base, enabling my contemporaneous teaching and strengthening my passion.

“Finally, Indiana Tech’s affiliation with the Small World Initiative strengthens our laboratory courses to actively engage students and—therefore—retain them in the sciences. This benefits our non-major courses as well as our new molecular environmental biology degree program,” Good said.

Every spring, Kim Spielman’s CJ 2600-Laws of Evidence course culminates in what has become his favorite class project—the mock trial.

“It is fun to observe the students as they put the exhibits and witness testimony together to develop the story they want to present at trial,” said Spielman, who is an associate professor of criminal justice for Indiana Tech’s Center for Criminal Justice. “It’s also fun to watch them complain that they can’t do this and then watch them develop their confidence.”

The mock trial is a yearly event for the class. The case is based on a fictional factual scenario provided by the National Institute for Trial Advocacy (NITA). NITA materials include exhibits, witness statements, police reports and other materials used in a real jury trial. Each class is divided into teams of six students. In the scenario, the teams are either prosecutors representing the state, or defense attorneys representing the person charged with a crime or crimes. There are two witnesses for each side. Each student on a team has a specific trial assignment: opening statement, direct examination of a witness, cross examination of a witness and closing argument. This spring there were three trials: six teams consisting of six students each. Jury members are recruited from other CJ classes, while witnesses are recruited from outside CJ.

Spielman works to make the experience as real as possible, soliciting area law professionals to judge the trials. This year, Allen County Superior Court Magistrate Sam Keirns presided over one of the trials. Other trials were judged by Jennifer Hitchcock, a local practicing attorney and graduate of the Indiana Tech’s pre-law program and its law school; and Antoinette Payne, a former New York attorney and adjunct professor at Indiana Tech.

“The students prepare most of the semester leading up to the trial. We review the factual scenario, the exhibits and discuss how the exhibits and witnesses can be used to support their side of the trial. The students learn trial techniques, but develop their own questions, trial tactics and trial strategy,” Spielman said. “Preparation includes practice in class and the trial involves a lot of critical thinking and thinking on your feet. In this area, the instructor stays in the background; it is their trial to win or lose.”

“The commanding officer of the FWPD Tactical Team is aware of the quality of our program and wanted our students involved in this exercise,” said Associate Professor and Director of Criminal Science and Pre-Law Dominic Lombardo.

Prior to each scenario, the sergeant explained to the students how they needed to roleplay. Once each drill was over, the sergeant conducted a debriefing for all of the students, explaining why the police responded the way they did, and the potential legal ramifications associated with each event.

“This was an outstanding opportunity for our students to see real police work up-close and learn from quality law enforcement professionals,” Lombardo said. “The officers took time to answer our students’ questions and made sure they got something from the exercise.” 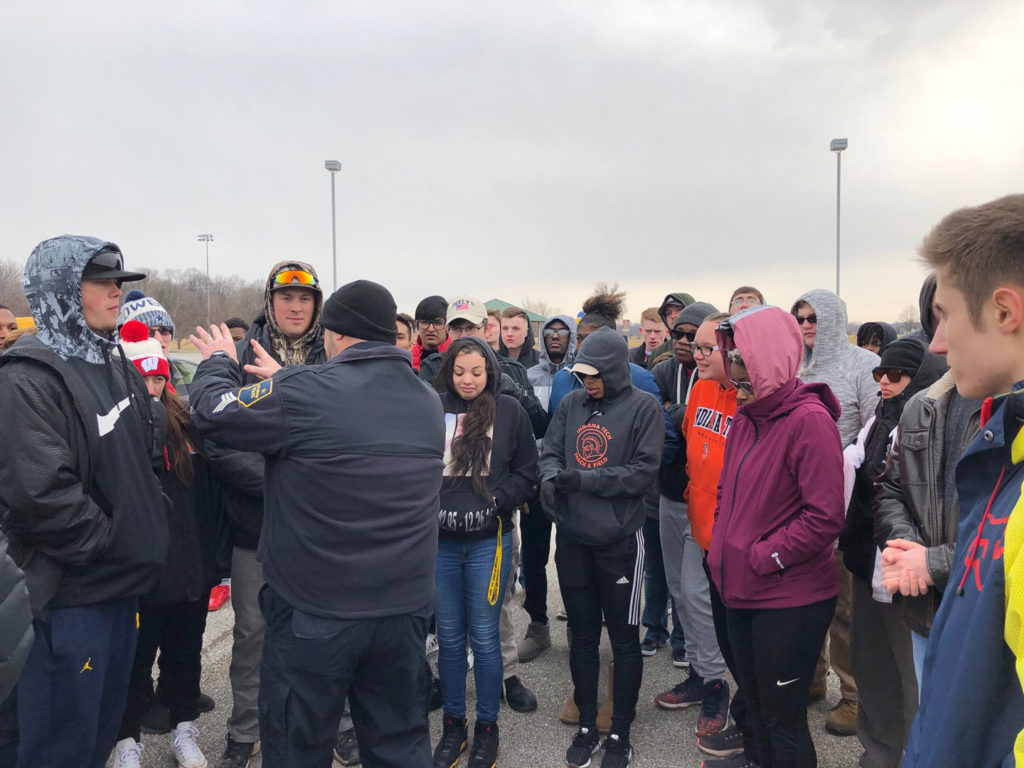 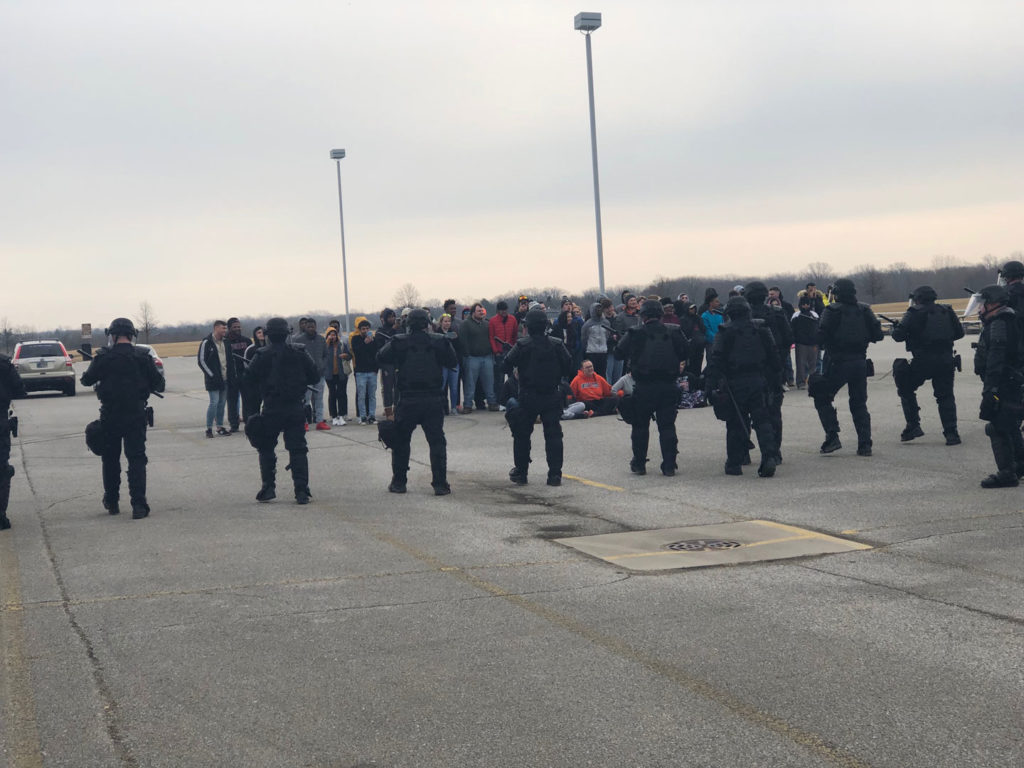 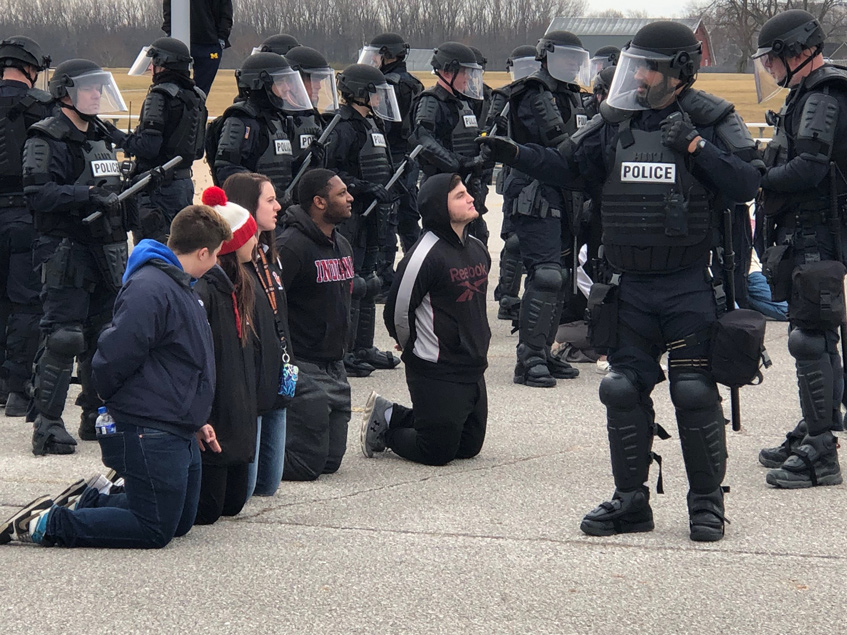 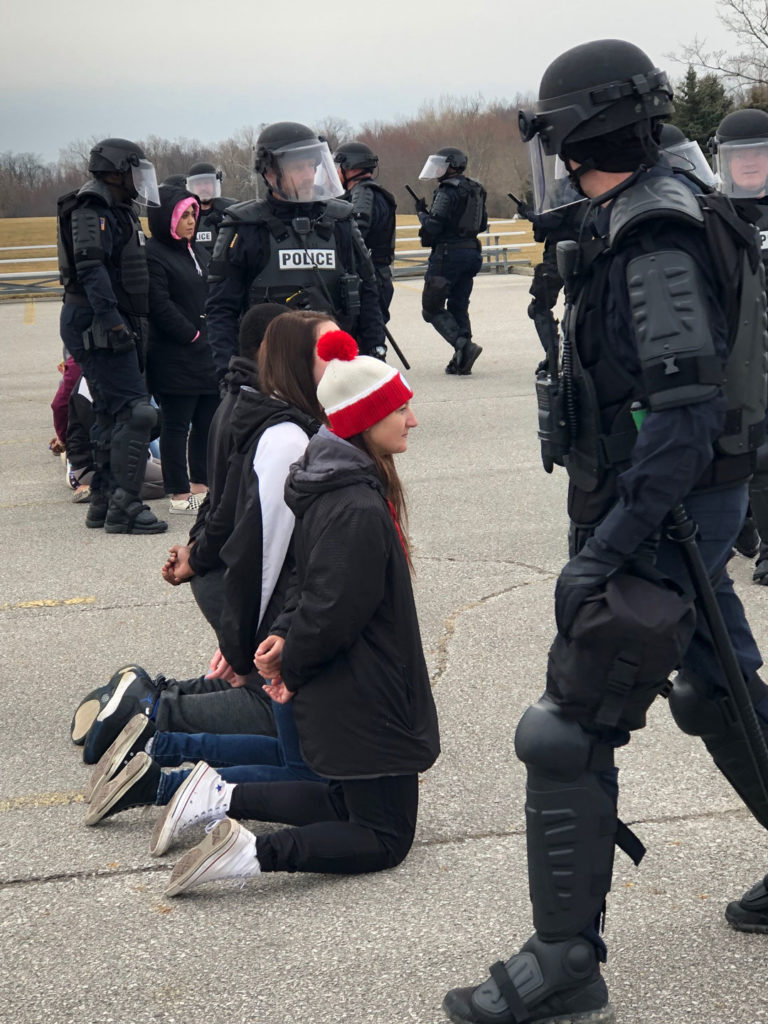